Resisting the State is generally celebrated among libertarians -- in which case, consistent libertarians should celebrate director Julian Schnabel's (Basquait, The Diving Bell) new film, Miral, based on the novel by his Palestinian wife, Rula Jebreal.

Miral has already stirred controversy in the Jewish community. Some Jewish leaders are slamming the film for being "one-sided." Schnabel admits that Miral shows Palestinian experiences from a Palestinian perspective. (Why is such "one-sidedness" never a problem when only the Israeli perspective is shown?)

Miral is not yet released on DVD in the United States, but it will likely happen. It is currently available as a PAL DVD import, which can be viewed on any region-free DVD player

You can read an interview with Rula Jebreal at Alternet.org, and read more about the controversy here.

Among other controversies, Miral depicts the torture of Palestinian women by the Israeli State, something that Jabreal says she suffered and which continues today to other Palestinians.
Posted by Thomas at 7:07 PM No comments:

We stole it right out from under them: This week, the special interests pushing the Internet Blacklist Bill called a big press conference with their allies in Congress, trying to create the illusion of broad support for Internet censorship. But our team caught wind of it and scrambled to make sure you were heard. Teaming up with conservative bloggers who also oppose the bill, we stole the story right out from under them: 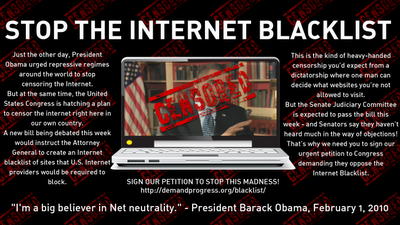 It was a great success, but we need your help now more than ever. Hollywood is dead set on passing a bill this year. Their lead sponsor has pledged to ram it through: "inaction is not an option, and we must pass online infringement legislation in this Congress." That's why an anonymous activist has agreed to match the donations of anybody who becomes a monthly sustainer, but only if you donate this week.

Become a sustainer today and help us defeat COICA and anything else the Hollywood executives throw at us. Your first two months' donations will be matched on a dollar-for-dollar basis. (You can cancel your monthly contributions at any time.)

Will you become a monthly sustainer of Demand Progress?

* Yes, I'll click here to become a monthly sustainer and have my first two contributions matched.

Check out some of this week's press coverage of our opposition to Internet censorship:

But the progressive activist organization Demand Progress and a group of conservative bloggers lead by Republican National Committee Internet Director Patrick Ruffini are staunchly opposed to the bill and the administration's recent moves to seize and shut down domains linking to pirated content. (The Hill)
We won the press war this week and made sure Washington knows we strongly oppose these noxious bills. But as Hollywood ramps up their attacks, we need your support so we can keep fighting for Internet freedom.

Thanks so much for your help: We're a 100% membership-funded organization and need your support to keep up our work.

-- The Demand Progress Team
Posted by Thomas at 6:21 PM No comments: