Cost of Freedom: The Anthology of Peace & Activism 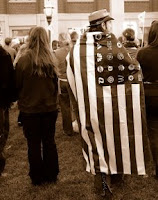 I am one of the contributors to the above book, The Cost of Freedom: The Anthology of Peace & Activism.

A lavish coffee table book that chronicles the wide spectrum of antiwar activism over these past several years. Not available from Amazon.com because (the editors say) Amazon wants a 55% discount.

So if you want The Cost of Freedom, you'll most likely have to buy it directly from the publisher, Howling Dog Press.
Posted by Thomas at 4:39 PM No comments:

Yet it occurs to me that the opposite is also true. Some people hope to benefit from a peace movement. And if so, surely they have an incentive to desire a perpetual peace movement -- which can only be achieved through perpetual war.

It does seem that various elements of the Left are less interested in stopping the war than in exploiting the peace movement. Voters for Peace wants to unite the peace and "climate change" movements. But that's no way to build an antiwar coalition. A "coalition" is a union of disparate groups around a single issue. Once you introduce other "progressive" issues, you drive away libertarians and conservatives who oppose the war, but who disagree with the "climate change" crowd.

John Walsh writes that United for Peace and Justice is preventing Libertarians and Greens from speaking at their rallies, so as to curry favor with the Democrats. Again, is the peace movement to be a broad coalition that can effectively stop the war, or is it to be a subsidiary of the Democratic Party, to be used to co-opt voters for the "antiwar" Nancy Pelosi?

Some "conservatives" pine for 9/11. Much as they may regret the tragedy of that day, I sense from reading their posts and blogs that a dark side within many "conservatives" misses those feelings of national unity, everyone rallying around Republican leaders, flags everywhere. Heady days. It's not something they dare admit even to themselves, but yes, many "conservatives" do miss 9/11. (See Sorry, Haters for an interesting indie film about a disturbed woman who misses 9/11.)

But are "progressives" any better? I think not. I suspect that many of them pine for the 1960s peace movement, which they owned, and jealously want to own again. They don't want their precious and fun-filled peace movement spoiled by the presence of libertarians and conservatives, however helpful the latter groups may be in shortening the war.

But why pick on conservatives and progressives? I've met libertarians, both pro- and antiwar, with ulterior motives. I know one Libertarian Party officer who quietly supported the war (refusing to oppose it when I twice confronted him in 2002). But by 2004, when the war was a done deal, and he saw that his prospects in the Party were best served by spinning himself as antiwar, he began to sell himself as an antiwar leader.

So yes, there are people across the political spectrum exploiting the war/antiwar issues for their own ulterior motives.

My own suggestion: those who sincerely oppose the war should set aside extraneous issues (like "climate change") and focus on building alliances with anyone of any ideology who opposes the war.
Posted by Thomas at 9:35 AM No comments:

A Better Rent Control -- Through Vouchers

Landlords and tenants may both benefit by replacing rent control with "rent vouchers."

Tenant advocates argue that because housing is a need, landlords should be forced to provide housing at an "affordable price." But food is a greater need, yet society doesn't force grocers or restaurants to subsidize the poor with "food price control." Instead we have food stamps that the poor may apply to their food purchases. We should likewise abolish rent control and give vouchers to the needy, which they could then apply to their rents. Landlords, needy tenants, and prospective tenants would all benefit, and they system would be both fairer and freer.

* Mobility for tenants. Under rent control many tenants are stuck in apartments they'd like to leave, if only they could find a comparably priced apartment elsewhere. But rent vouchers (like school vouchers) would be portable. Tenants could apply them to the building of their choice, just a food stamps can be spent in any grocery store.

* More affordable housing. New and prospective tenants are hurt by rent control. Current tenants in rent controlled apart­ments won't vacate. Developers are less likely to build afford­able housing; they prefer to invest in condos and luxury apart­ments, wary of building units that might later be "confiscated" in a hostile political climate. Abolishing rent control would free up old units for new tenants, and rent vouchers would help them afford it. It would also encourage developers to build new moderately priced units, and landlords to maintain their current buildings.

* Less fraud. Tenants cling to rent controlled units they no longer use as a primary residence, often illegally subletting them. Landlords bear the unfair burden of hiring private inves­tigators to prove such fraud. Innocent tenants see this as harassment. Housing vouchers would eliminate the incentive for tenant fraud and landlord harassment, which means...

* Less court congestion. Courts won't have to hear so much landlord/tenant litigation. That means quicker court dates for other cases.

* Fair to landlords. Grocers aren't expected to bear the sole burden of feeding the poor. Rather than legislating food prices, everyone pays taxes for food stamps. Likewise, it's only fair that society share the burden of housing its poor through rent vouchers, rather than punishing landlords for supplying a need.

* Targets needy tenants. Rent control is a moral farce partially because there's no means testing. Some tenants are wealthier than their landlords; in such cases the poor are sub­sidizing the rich. A rare instance? Maybe, maybe not. In any event, rent vouchers (like food stamps) can be means tested, so that only needy tenants receive them.

Although rent vouchers surpass rent control in promoting economic efficiency, freedom of movement, and justice, there will be opponents. Many people benefit from the inefficiencies and injustices of rent control. Lawyers and private investigators profit from the litigation. Politicians (notably, Santa Monicans for Renters Rights) benefit from landlord/tenant conflict. There are no political battles between grocers and eaters; both are satisfied with food stamps. Where's the political opportunity in that?

Wealthy tenants are another hurdle. Why surrender rent control if you won't qualify for vouchers? And while prospective tenants would benefit from rent vouchers, prospective tenants are harder to organize politically than current tenants. Taxpayers will also balk. Why share the burden of housing the poor, when you can shift the entire burden to landlords? (Feel good about your "progressive" vote for rent control--without having to pay for it!)

Opponents will also argue (many, ingeniously) that vouchers are an attempt to eliminate affordable housing; that first we replace rent control with vouchers, then we eliminate vouchers. Not so. Rent control exists because tenants outnumber landlords in the voting booth. That won't change. There's no reason to imagine that rent vouchers will be endangered any more than food stamps.

Needy tenants will gain mobility through vouchers, prospec­tive tenants will see an increase in affordable apartments being built, current buildings will be better maintained, and landlords will be treated more fairly. That last one alone will infuriate class warriors, some of whom would rather punish needy and pros­pective tenants than have any benefit accrue to landlords (desp­ite the irony that some landlords are poorer than their tenants).

Even so, rent vouchers make greater economic sense than rent control. And they promote greater fairness and freedom.
Posted by Thomas at 10:36 PM 1 comment: