Ted Brown to Run for Chair of California Libertarian Party 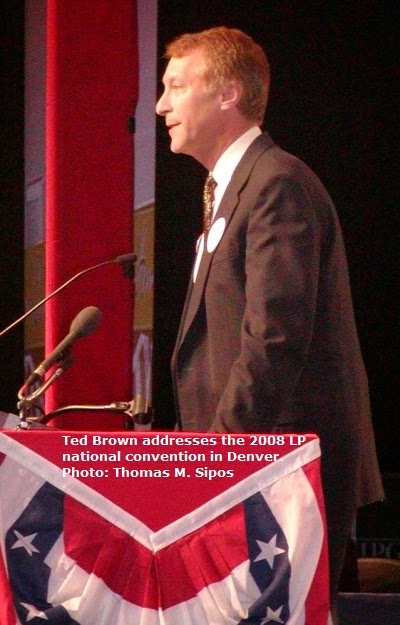 Pasadena libertarian activist Ted Brown has announced his intentions to run for chair of the Libertarian Party of California at the upcoming state convention in May.

Kevin Takenaga has been chair since May of 2007, and will likely run for yet another term. But after eight years, he's been there too long. From what I can see, the LPC is mired in apathy and inertia. The party is invisible to the public. While Top Two is partially to blame for that, it's also true that state conventions have attracted ever fewer delegates. It seems California libertarians don't think that participating in the LPC is worth the bother.

I believe a Ted Brown-led LPC will reinvigorate the party. Here are Brown's own words, announcing his candidacy:

I have decided to run for Chair of the Libertarian Party of California. The state convention will be held on Sunday, May 31, in Las Vegas, Nevada. I urge you to attend and to support my candidacy.

The California LP has fallen on hard times over the last few years. Membership hovers around 800, where it once stood at 7,000 or more. Fundraising and new member recruitment at the state party level have slowed to a tiny trickle. There has been no newsletter for quite some time, and very little communication with members, so it's difficult to find out what's going on in the state party.

Or, perhaps we hear nothing because nothing is happening, which is even less acceptable. Transparency is #1 with me.

It's time for a few changes. Libertarians need to regroup and show that we are still on duty -- fighting for personal freedom, economic freedom, and a non-interventionist foreign policy. If we won’t do it, who will?

I have been an LP member for 36 years, and have held almost every job in the party during that time. I was chair from 1988 to 1989, served on the Executive Committee for 20 years, served as Los Angeles County chair, and newsletter editor. I handled candidate recruitment for over 20 years, personally signing up hundreds of LP candidates. I have also run as a Libertarian candidate myself 15 times.

I took a break from activism about 7 years ago to build my business, though I have attended most conventions and currently serve as chair of the Judicial Committee and as secretary of my local group in Pasadena. It's time for me to come back and work to revitalize the California LP.

This will be a tough job and I need your help to do it. I'm looking for Libertarians who are interested in the following areas (not a complete list):

* Being a candidate (partisan or non-partisan)

* Testifying at the state capitol

* County LP organizations (where we don't have any now)

* Liaison and outreach to other libertarian-oriented groups


Please e-mail me at tedbrown1776@hotmail.com with your support, ideas, and areas for which you wish to volunteer. You have strengths which you can share and the party can use. Help the cause of liberty forge ahead, not fizzle away. Thanks in advance for your help, and see you in Las Vegas!


PS: If you want things to turn around for the Libertarian Party of California, you need to make your voice heard and your vote count! The state convention on May 31 is your chance to do just that. (Go to Ca.lp.org/convention-2015-prices for details.)