Most Los Angeles libertarians are likely familiar with KFI-AM's John and Ken Show, featuring John Kobylt and Ken Chiampou. It's not only the most popular radio show in L.A., it's the most popular local radio show anywhere in the U.S., attracting 1.2 million listeners during its afternoon drive-time slot.

Which might not be so great for the LP's reputation. Augustus Sol Invictus, the Florida LP's candidate for U.S. Senate, is getting much attention for his bizarre statements and behavior. Invictus admitted to drinking goat's blood during a pagan ritual sacrifice, predicted a coming race war, and has expressed pride in his association with skinheads. (Invictus is a criminal defense attorney.)

Last Monday, October 8th, John and Shannon Farren (who was filling in for the vacationing Ken), discussed Invictus. John said (and Shannon agreed) that while the LP largely reflects his political views, he could never support the party because they seem to nominate candidates who've fallen out of the Crazy Tree.

You can hear the portion of their show where they discussed Invictus by clicking here. 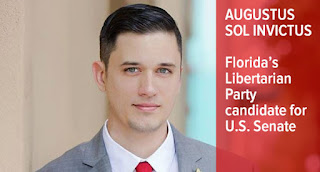 Posted by Thomas at 2:04 AM No comments: