Our Saturday night Loscon 46 memorial party honored deceased science-fiction, fantasy and horror pros and fans with some connection to L.A. fandom or libertarianism (LASFS or the KHC). I called it "LosGone."

Some of the remembered departed have been gone for years, but too many left us recently. Karl Hess Club alums J. Neil Schulman and Brad Linaweaver died this very year. Samuel Edward Konkin III, Chuck Hammill (and his father), Ray Bradbury, Virginia Heinlein, Ray Harryhausen, Kevin McCarthy, Richard Hatch, Jerry Pournelle, Harlan Ellison and others were remembered in our flyer or in the Mondo Cult zines on display.

My 17" laptop video and audio was anemic for playing old interview videos or episodes created by the fallen, but the hotel room TV was much bigger, louder and thankfully connected to YouTube.

The most requested media playback was audio of Ronald Reagan before he was POTUS reading Brad's account of an encounter with a socialist coed with commentary including "How right he is..."

We also watched an interview with Richard Hatch, Brad Linaweaver and others associated with Silicon Assassin. 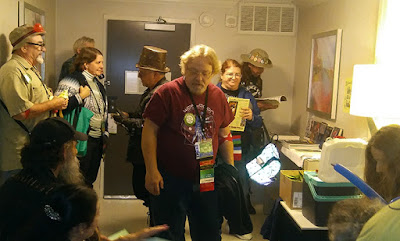 The first hour or so of the SEK3 memorial video from 2004 was played. J. Neil Schulman was ringmaster for the likes of Brad, me, Jeff Riggenbach, Victor and Vanessa Koman, Sam's brother Alan, and others giving tribute to SEK3. A nice time capsule of that time.

Also played a good Reason interview with Neil about his movie projects including Lady Magdalene's and Alongside Night. One person likely not a libertarian said he was leaving when I played a clip of Ron Paul and Neil. My response was "But you're going to miss the Alex Jones video!"

Neil's Twilight Zone episode "Profile In Silver" about a time-traveler stopping the JFK assassination attracted more people from the hallway. 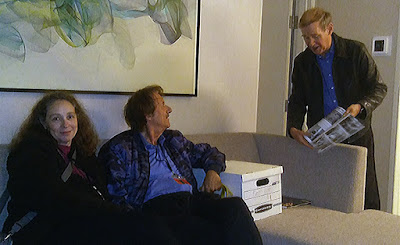 The party was well received by the convention operators, who lent us a doorstop to let passers-by on the party floor know we were actually open. The room was pretty crowded even before that though. Refreshments were served including a variety of Sam Adams beer (of "bheer" in fandomese). I also brought a case of Chico bottled brews from Sierra Nevada including cans of "Old Chico." Also freshly picked tangerines from my family's tree in Tustin. 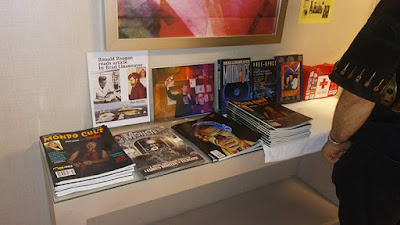 I didn't get to print out the tributes from the Mondo Cult website before the event as I had hoped, but filmmaker Ed Plumb saved the day by bringing a box of physical Mondo Cult magazines featuring the departed as writers or subjects of articles. They were perused and taken away by attendees.

We closed our party after others had finished around 12:30 am.